In our Literature class we have been analysing the short story “The Yellow Wallpaper” by Charlotte Perkins Gilman and were asked to get together in pairs, choose a statement and write an essay on it. 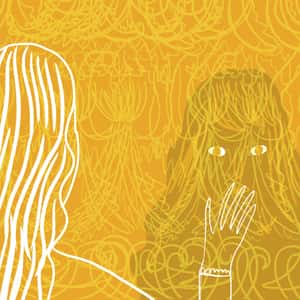 I worked with Agustin and this is the essay that we wrote:

The roles of men and women during the Victorian Times were very different. While men were expected to be educated and live a sociable life while working, women were expected to stay at home, take care of the domestic responsibilities and the children and were allowed to express only certain opinions as they were barely considered people. The women that appear in “The Yellow Wallpaper”, by Charlotte Perkins Gilman, metonymically represent the women of the 19th century, although the three in very different ways.

First of all, throughout the story Jennie, the narrator’s sister-in-law, is portrayed as the idyllic housewife of the time. She stayed in the house all day long and did everything that a man didn’t do at those times but that a woman was expected to do, which included doing laundry, cleaning the house, cooking for everyone, including the narrator, that in her situation couldn’t do much. “She is a perfect, an enthusiastic housekeeper, and hopes for no better profession”, this quotation shows  the representation of Jennie as the ideal woman. She loved her role as a housekeeper and didn’t aspire to do anything else, since women weren’t supposed to.

As regards the narrator, through her, the author conveys the restrictions women used to have. But since according to John, her husband, she was “sick”, she was forbidden to do many more things, which left her with the ability to do only very specific things, such as sleep a lot, eat, read, take walks, and she was absolutely forbidden to work until she was well again. All these things were supposed to make her get better. And even though she believed “that congenial work, with excitement and change, would do [her] good”, she didn’t say anything. “If a physician of high standing, and one’s own husband, assures friends and relatives that there is really nothing the matter with one but temporary nervous depression – a slight hysterical tendency – what is one to do?”, this quotation shows the power and superiority of men and their opinions over women’s and how the narrator didn’t have a voice of her own, if her husband said something was a certain way, then it was that certain way. And by using the pronoun ‘one’, it shows she isn’t talking just about herself, she is talking in behalf of the female community.

Furthermore, by asking the question of “what is one to do?”, she is questioning her existence. Due to all these restrictions, she can’t be who she really is. This causes her to supposedly start going mad. But in reality, she wasn’t crazy, she was simply labeled as that since she started acting in a way that was out of the ordinary for women at that time. She started writing in secret, and she even tried saying that she was not getting better because her problem wasn’t physical, but mental, which only caused John to scold her. He immediately told her reproachfully: “I beg of you (…) that you will never for one instant let that idea enter your mind! There is nothing so dangerous, so fascinating, to a temperament like yours. It is a false and foolish fancy. Can you trust me as a physician when I tell you so?”. This shows that to him, like most people, everything that one couldn’t see nor touch wasn’t real. Positivism didn’t support it and whenever someone tried defying that, they were viewed as crazy. The narrator believed that this made her husband “so wise”, when in reality, these beliefs showed ignorance.

Finally, the last woman that appears in the story is the one in the wallpaper. She is used to represent the women of the time that were trying to break free from the oppressive society. To describe her and her behaviour the narrator says: “By daylight she is subdued, quiet. I fancy it is the pattern that keeps her so still”. In this quotation, there is a parallelism between her and the women that during the day, when they were out in public, acted in a restrained and low-key way as not to reveal their true selves and not to have to deal with society’s heavy opposition. And the pattern portrays this precisely, society’s opposition and oppression, which caused women to act that way. But at night, when she crept out of the wallpaper, she depicts the women that let go and allowed themselves to be who they truly were for a while. And they did it at night as not to be seen and treated as mad people.