In order to become more aware of what is going on around the world, our teacher Pilar, asked us to prepare an oral presentation on an article. 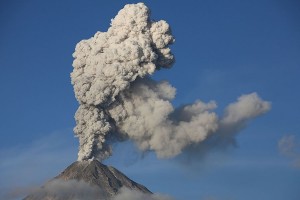 A volcano has erupted in western Mexico, spewing black clouds of ash over 2.8km (1.7 miles) into the sky and forcing the evacuation of inhabitants.

The eruption from Colima volcano, also known as the “Volcano of Fire”, prompted authorities to seal off a 12km area around the crater on 11 July, AFP reports.

Residents living near the volcano were evacuated and the airport of Colima City was closed to private and commercial flights due to the plumes of ash ejected by the volcano.

“The communities in this 12km radius are very small and don’t exceed 800 inhabitants. They have all been evacuated,” national civil protection co-ordinator Luis Felipe Puente was quoted as saying.

Ash from the volcano, which began erupting on 10 July, spread as far as Colima City over 30km away.

One village near the mountain, Yerbabuena, was reportedly covered in up to 5cm of ash.

Mexico’s interior ministry warned that the volcanic activity in the region was similar to a major eruption in 1913.

AFP cited the ministry as saying that one of three scenarios was possible: a drop in volcanic activity over the coming days, a collapse of the volcano’s dome or a 1913-like explosion.

Colima is one of the most active volcanoes in North America, having erupted more than 40 times since 1576.

The volcano lies some 470km away from Mexico City.