Below are a series of videos to help us understand better what the Berlin Blockade was, why it was caused, and what consequences it had.

After watching the following videos, we were asked to complete the graph: 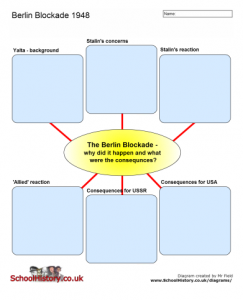 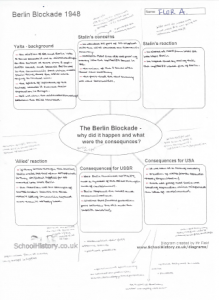 And answer the questions below:

1. What was life like in Berlin in the post-war era?

In the third video it is described since the gas and electric supplies were cut, the people in Western Berlin were facing a very hard winter. They had to get used to cooking slowly and to candle light as “the russian blockade brought darkness to the city”. In addition, the people were running out of medical supplies.

2. How did Soviet policy towards Berlin differ from that of the West?

There were different governments. West Berlin was capitalist while East Berlin was communist. Moreover, Stalin wanted his the Soviet part of Berlin to be crippled wheareas wanted their part to have an econimic recovery. In the East, rebuilding had hardly got underway. Everything was Russian. They would only allow one brand of each product to be sold, no publicity was allowed, all the cars were the same, as were the buildings.

3. Why was reform of the German currency a key issue for both sides?

Because the USA wanted to replace the inflated war time currency with a more stable one which the Soviets saw as a provocative move since they wanted to introduce their own currency.

4. Why was the airlift such a major feat?

Because it consisted of 500 flights and 5000 tons a day for almost a full year despite the weather and accidents. In addition, the pilots had to keep exact timing and speed becuase there was another aircraft 30 seconds ahead of them at the same level.

5. In what respect can the USSR and US be responsible for further increasing tensions during the airlift?

The airlift created an atmosphere of uncertainty as the Soviets could never be sure if the aircrafts were overflying to drop goods or to bombard. Therefore this made both countries be suspicious of one another.

6. Why did Stalin eventually agree to talks over the airlift?

Because he had his own problems and was in no position to fight.

Who was more to blame for Berlin becoming a major flashpoint in the Cold War, the Soviets or the Americans?

They were both to blame because the Soviets closed all roads into West Berlin, which wasn’t under their control,  soit could be seen as a threatening action and the Americans because their aircrafts overflying East Germany was very dangerous because the USSR couldn’t tell if they were going to bombard or drop goods.