In our History class, we finished studying the Second World War, and so we moved onto our next topic: The Cold War. 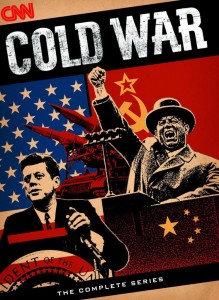 Our teacher, Lenny, created a post in her blog where we had to look at the following slideshare and answer the questions on the third slide.

The Outbreak of the Cold War. from lennyambrosini

1. Why did the wartime alliance fall apart?

USA and the USSR had allied against Facism, but once it was defeated, the reason for co-operation was gone and their differences started emerging.

2. What were the major differences between the superpowers?

The main difference between these major powers was that the USA was capitalist and the USSR was communist. The last one was still resentful about Great Britain and USA trying to stop the Russian Revolution in 1917, about the Red Scare in the 1920s and about not being given enough help during WW2, according to them. On the other hand, the Americans were also bitter because Stalin had signed the Nazi-Soviet Pact with Germany. Another difference between these two, was that the European/Asian country, suffered many more casualties and deaths during WW2 while the other one, although it still suffered a lot of deaths, wasn’t as affected.

Its leaders also had different objectives. Stalin wanted Germany to pay huge reparations and wanted a buffer of friendly states to protect the USSR from being invaded again. While USA, with Britain, wanted to protect democracy, to help Germany recover and was afraid that large areas of Eastern Europe could fall under Soviet Control.

3. Explain the importance of Yalta and Potsdam conferneces.

The aims of these conferences were to discuss the future, discuss what to do with the German leaders after the war, what would happen to the occupied countries after liberation, how to end the war with Japan and how to build long lasting peace.

Later on, we analysed the confernce in class and did this slideshare:

We also analysed the following questions.

Why had the agreements at Yalta been relatively easy to reach while Potsdam had mainly disagreements?

How far were the disagreements at Potsdam to blame for the start of the Cold War?