Here´s our Language Test. We must do the research and follow the tasks and post them in our blogs.

1.Look for a biography of a celebrity or a person you admire  and post it in your blog. Write a short paragraph explaining why you have chosen him or her.(50 words)

2. Write an interview you could have had with that person and post it.What would you ask him/her? Use at least four different tense forms. (at least 15 exchanges)

3.Prepare an online questionnaire to check everybody´s knowledge of this famous person.  Try this one if you like:

Jennifer Shrader Lawrence was born on the 15th of August of 1990 (age 25) in Louisville, Kentucky (USA). Her parents are Gary and Karen Lawrence and she has to older brothers called Ben and Blaine. At the moment she is dating her X-Men co-star, Nicholas Hoult.

By the age of 14 she decided that she wanted to pursue an acting career and went to New York to do some commercials. One day, when she was leaving an agency, Jen was asked by another agent if he could take a picture of her. The next day, that agent invited her to the studio for a cold read audition. That was when she started appearing in MTV commercials and some movies.

Now, she is best known for her roles in the movies The Hunger Games, Silver Lining Playbook and American Hustle but she’s done around 20 movies and has won at least 15 awards including an Academy Award (an Oscar) for Best Actress.

I chose to talk about her because I really like that she stays true to herself, whenever she is asked to lose weight for a movie he refuses to do it, she loves food and she is hilarious. 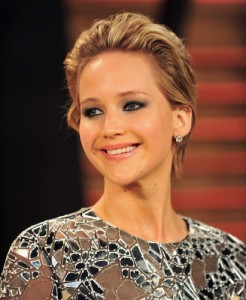 F: – How was filming Catching Fire?

J: – It was very fun, but exhausting at the same time since it required a lot a physical activity, we had to get in shape and stuff.

F: – And what about your co-stars? Are they fun to shoot with?

J: – Yes, absolutely! They are so fun and we all get along so well! Especially me and Josh, we are like brother and sister.

F: – How cute! But do you see each other very often?

J: – At the moment yes, since we are shooting Mockingjay Part 1, but when we’re not shooting, we really don’t have much time to gather and talk because we’re full of work and new projects.

F: – Oh! You’re right! You’re filming Mockingjay Part 1! Is it harder than the other movies?

J: – In my opinion, it definitely is since it’s more challenging and has a lot more action.

F: – And what will you do when you finish shooting?

J: – Well, I have just bought a house in London with my boyfriend Nick, so I think we’ll just be there and relax for some time.

F: – For how long have you and Nicholas been dating?

J: – We started dating in 2011 and in January of 2013 we broke up because of our busy schedules, but later that year in July, we got back together and we’ve been dating since then.

J: – We met while shooting X-Men: Days of Future Past.

F: – How did it feel winning an Oscar?

J: – It was unbelievable! But so embarrassing since, I’m not sure if you knew, but I fell while going up the stairs to receive the award!

F: – Yeah! And you also fell at this year’s Academy Awards, right?

J: – Yes! I was waving at the crowd and didn’t see like this cone so I tripped.

F: – And you also were nominated at this year’s Oscars! Congratulations!

F: – And your acting in American Hustle, in my opinion, was amazing! Too bad you didn’t win..

J: – Yeah but I was already so happy for being nominated and, to be honest, losing against Lupita was an honour! Her acting in 12 Years of Slave was breath-taking! She’s a wonderful actress.

F: – I must agree with you on that. She was truly incredible!

F: – And what were you wearing?

J: – I was wearing Dior, it was a beautiful bright red dress.

F: – And the year before that?